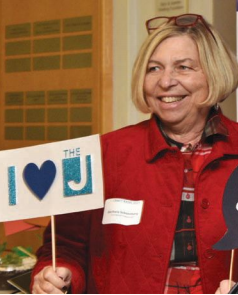 “Craft Bash has a pulse on this community; it reminds us how important camaraderie is to leading a fulfilling life,” said Caryl Marcus-Stape, Event Chair of the first annual Craft Bash and current co-chair.

With over 300 participants at CB17, Craft Bash is now catalogued as one of the J’s many success stories. It seemed fitting, then, to use the event as an opportunity to honor one of our esteemed lay leaders.

Barbara has been involved in Delaware Jewish life for over 30 years, elevating the achievements of our community through her commitment and everlasting drive. Moving to Wilmington in 1963, she became involved with Jewish Federation of Delaware in the early 1980s, serving as Board President from 1998-2000, and has continued her presence ever since. Barbara has been on the JCC Board for 12 years, serving in nearly every role and capacity. She has helped with budgets of various community agencies, including Albert Einstein Academy, and has served on the Kutz Home Executive Committee, where she’s a lifetime member, for over 20 years.

At Jewish Federation, Barbara is the first to pitch in with fundraising, working tirelessly for their Annual Campaign. She’s considered by all at JFD “one of the best fundraisers.”

“I love asking people to give $18 more,” says Barbara, to whom the number’s association to chai holds special meaning. Barbara feels life (chai) is a gift, and she’s not one to waste it. She translates that by giving back to this community without a second thought.

In turn, we can give back to her.