Jean Fennimor, a dedicated nurse, basketball player, and J member, had her life turned upside down on September 9th 2015 when all of a sudden her whole lower body went numb and she was unable to walk. Luc 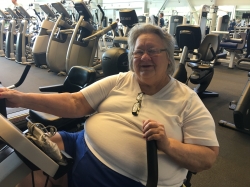 kily that same day she had a doctor’s appointment.  As the doctor came in to see her, he knew right away that something was terribly wrong. He immediately called an ambulance to take her to the hospital for emergency surgery.

Jean suddenly developed a rare life threatening neurodisease called Caudal Equina Syndrome (CES.) The disease affects the entire lower body, significantly limiting its control. After an 8 hour spine surgery, Jean spent the next 4 days in the hospital. She was told that people with this disease have less than a 10% chance of recovery and that it would take a minimum of 18 months of significant rehabilitation through exercise for her to be able to get through it. Jean’s doctor told her that he didn’t think he would ever see her walk again.  But as someone that had taken care of others her whole life, Jean was determined to overcome this disease so that she could continue to help others.

Instead of going to a rehabilitation center, Jean decided that she would rehabilitate herself and do the maximum repetitions of exercises that her doctor recommended. While Jean had used the J’s pool often as a member, she was not familiar with the fitness center and was afraid of falling while trying to get on a cardio machine. At first she could barely get in the J’s door, but with the help of her family and J staff and members, she was able to get onto a cardio machine for the first time and complete 5 minutes of exercise.

Since that first step, Jean has not stopped coming to the J in her continuous battle for her health and independence.  She is now able to walk into the J by herself and complete a whole hour of exercise on the J’s machines. A big reason for the high fatality rate from Jean’s disease is due to the lack of absolute persistence and motivation required to push oneself through the pain during consistent exercise. Jean has attributed her ability to keep going to both her desire to one day help others again and the love, support and encouragement she has received from J staff and members to keep fighting.

About 9 months ago, Jean was barely able to get herself in and out of bed. She felt like a prisoner in her own body as she lost her independence. Today, Jean continues on her path of recovery each day at the J. She was hesitant to share her story, but decided that if she could inspire just one person to keep going, it would all be worth it.

Diagnosed with Parkinson's disease, Mel Pell comes to the J’s fitness center with a smile on his face each week to fight for his health and independence.  He goes to physical therapy as well, but says that when he works out at the J, he doesn’t feel like he has an illness. Mel works with one of our fitness trainers to keep his muscles engaged and help prevent deterioration. Mel’s disease impacts the muscles in his throat that allow him to swallow, so while he lifts weights, he sings during his workouts to keep his throat and his spirits strong.

In 2014, one of the J's Sharks swim coaches had an idea: “What if we had our swimmers raise money for the Nemours/AI DuPont Children’s Hospital?” and Mitzvah Laps was born. A sign-up sheet was passed around, and the swimmers asked their friends and family to sponsor them for each lap they swam. Over 100 swimmers swam 4,311 laps and raised about $5,600! A representative from Nemours came to the next practice and received a giant check for $4,068; the remaining money was donated to the swim team.